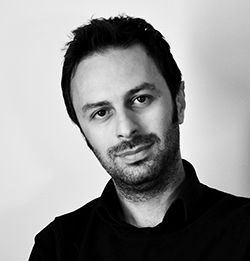 Artist, Architect,Designer and Researcher born in Tehran, live and work in London.

He started his career as an Animator in 1997 where his animation Advertisements, Voles and Cartoons were broadcast on Iranian National TV.In 1999, Sadeghy went on to study Architecture at Tehran University of Science and Technology receiving a Bachelor of Architecture Degree. In 2007, he moved to London to further his studies at the Architectural Association (AA). The Emergent Technologies and Design programme focussed on biology, genetics and evolution. He later became a Tutor in AA from 2014 to 2016. During his time at the AA, he cofounded studio INTEGRATE which involved designing and fabricating limited edition furniture and products as well as exhibiting art installations. The limited edition interior design products went on to win design awards and have been exhibited in London Pad, by gallery SMO in 2014, London Design Festival 2014 and Design Shanghai 2015.

Sadeghy continued to research Islamic architecture, art and design for five years after finishing his MSc in Emergent Technologies and Design. His findings were widely published in magazines such as Architectural Design magazine in April 2012 and exhibited at Asia House, London, 2014. Following his MSc, Sadeghy joined Norman Foster + Partners in the London office to work on the Apple Campus Headquarters in California from 2007 to 2013. Apple Campus is one of the largest and most sustainable office buildings in the world.

All of Sadeghy’s artwork is profoundly influenced by his varied life experiences. His recent body of work is centered around crowd and their occupation of space; it is a reflection on the crowd of people. It places particular emphasis on form and location in a society controlled by technology and data. Moving between artistic expression and architectural sensation, “circumambulating” responds to a new way of looking at rituals all the while responding to the everyday mundane movement through an Urban landscape. He is fascinated by; form, pattern and order, with how people move, interact, communicate and behave and most importantly with the emotion and power evident in a collective in contemporary society.

Chahar Bagh translates as “Four Gardens”, the name of the Islamic Garden typology. Resembling heaven, the land is divided into 4 parts by water and passageways. With regards to environmental and security reasons, many of these gardens have tall, dense walls. As well as being designed to keep ordinary people out, they ensure access is reserved for royalty. These most of the times are hidden away from the masses. I researched on few of these historical gardens. these historical gardens are now public.

Crowds of humans naturally behave in order. Through their movement in space, their built environment and their interaction with each other. This ritual in the crowd is shown as a magnetic field between powerful poles which instil order .

Circumambulating is centred around the crowd and their rituals in the contemporary society. It places particular emphasis on form and location in a society controlled by technology and data. Moving between artistic expression and architectural sensation, “circumambulating” responds to a new way of looking at rituals, their form, pattern and order.