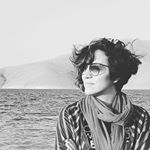 Her work is mainly about violence. What she intends to do is to investigate the very phenomenon of violence. Regarding culture, history, architecture and even relationships, She tries to have a neutral view about violence, neither glorify it or condemn it. She believe what she is inclined most is finding a way to understand the concept of Evil which she believe is omnipresent and is usually ignored in our culture.

2017- Where were that world, Sohrab Gallery

2017- An Island of imagination – Mika Gallery

2017- The hidden face of being- Bayan Gallery